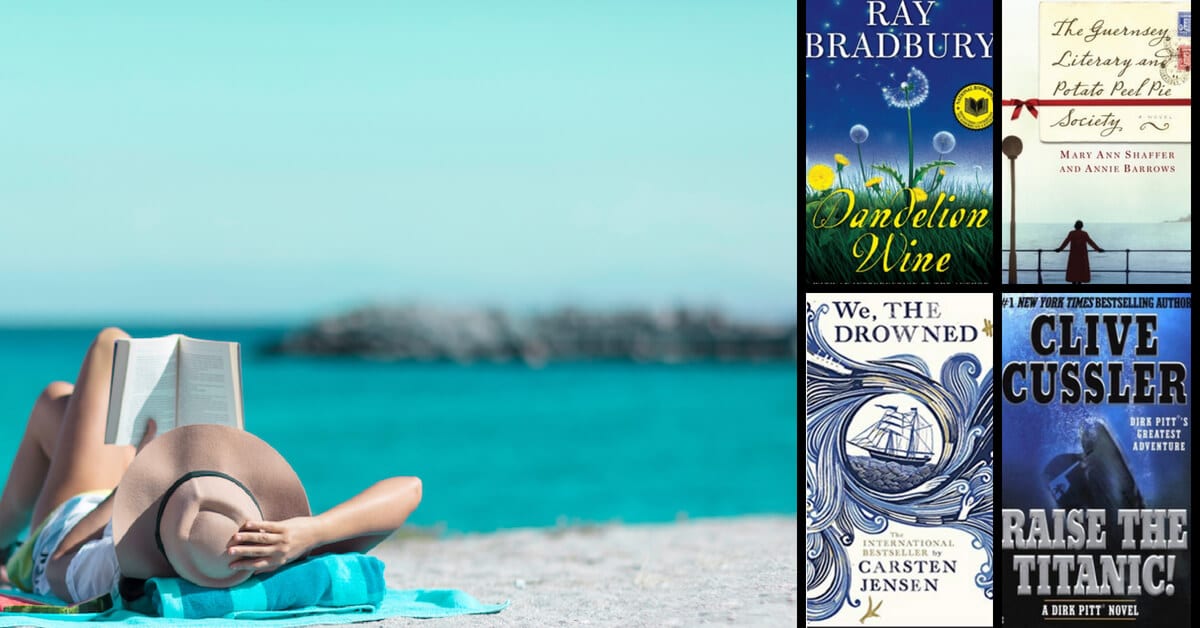 It’s finally summer, and that means it’s the perfect time for road trips, beach vacations, relaxing by the pool, and enjoying a good book…or two (or three or four). But where do you start? Here’s a quick look of books that truly encapsulate the sunny summer season.

For those who want a quick and easy read, there are two books that are absolutely perfect for summer.

Dandelion Wine by Ray Bradbury
Dandelion Wine takes place in the small town of Green Town, IL during the summer of 1928. Typical of Bradbury, most chapters read like small short stories, as you follow the summer adventures of 12 year-old Douglas Spaulding (loosely based on Bradbury himself).

Why You Should Read It: In this short novel Bradbury manages to convey the childish excitement and love for summer than all kids have growing up. And for adults who in between family trip planning and entertaining out-of-school children 24-7 may have forgotten WHY summer is the best season of them all, this book is a poignant yet enjoyable reminder.

The Guernsey Literary and Potato Peel Pie Society by Mary Ann Shaffer and Annie Barrows
A quick, enjoyable read, Guernsey is a (mostly) epistolary novel that takes place in England post-World War II. A young man from the Island of Guernsey (located in the English Channel) sends a letter to a young writer, Juliet Ashton, asking for book recommendations. Through this correspondence Miss Ashton slowly learns about the German Occupation of the Channel Islands and the quirky, but lovable members of the Guernsey Literary and Potato Peel Pie Society.

Most people don’t want to read 1000 page novels, and that’s okay. But on those cross-country road trips, or for those who want their summer read to last all summer, here are a couple longer suggestions.

We, The Drowned by Carsten Jensen
Summer is usually synonymous with the Sea, which is what prompted this long-read choice. We, The Drowned follows the story of a small town of seafaring Danish sailors through multiple generations. For 200 years this novel covers the rise and fall of the shipping industry in a small town and the seafaring adventures of a select few residents.

Why You Should Read It: Most sea-based stories often romanticize the sailing on the ocean as a non-stop grand adventure, and while this story does show some great adventures at sea, it also shows the dangerous reality that sailors often faced. Additionally, this novel also shows the often-traumatic effect on the family left behind. It is, without a doubt, a modern classic and seafaring epic.

The Dirk Pitt Series by Clive Cussler
What do you get when you mix Jimmy Buffet with James Bond? Dirk Pitt of course. Working for the National Underwater and Marina Agency (NUMA) Dirk Pitt manages to both discover numerous shipwrecks and save the world from villains whose plots include such insane plots as moving the Mississippi River, flooding the entire world while select few survive on a giant cruise ship, and raising the Titanic.

Why You Should Read It: Summer is time for adventure and Dirk Pitt has plenty of those…often in hot, sunny locations where he usually ends up beating the bad-guy and getting the girl. What more could you want for a fun summer series?