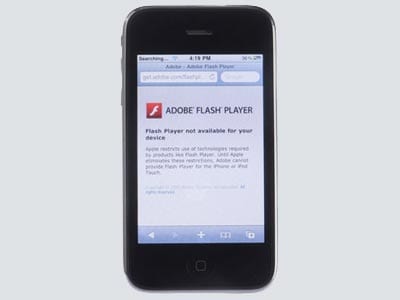 We Want it All

In April of 2010, Steve Jobs released a statement speaking out on why he wouldn’t allow Flash on “i” devices. There were several points he felt very strongly about:

1.    The web should be “open” and Flash isn’t. That means that there’s a company (Adobe) that controls what and when it updates. What if he can’t get them to do something when he wants it done?

2.    He talks about how Adobe says that 75% of all video on the web is in Flash, and then lists a string of sites that have posted “i” friendly videos including Netflix, Facebook, major TV networks and The Wall Street Journal. So, I suppose we don’t need to see absolutely every video there is, but what about the Flash elements that many web developers use for website intros, navigation, forms, image animations and the like? They still can’t be seen, and there’s a lot of it out there.

3.    Sometimes Flash can cause Macs to crash. The way I see it, if Apple expects everyone to get on board and make their software work for their machines, shouldn’t Apple do the same for them, especially with software that’s so widely used and accepted?

4.    Flash takes time to load, thereby consuming battery power. A valid point, but a well-done Flash site is worth the wait in my opinion.

5.    Touch. Flash used to be built with the mouse in mind. So we program it for clicking instead of rollovers. Solved.

6.    He said that Flash is a cross-platform tool, and the “i” devices aren’t its main goal. That’s true, but wouldn’t you want your software to be cross-platform? A lot of people run both Mac and PC and I’m sure would really appreciate if everything were available and functional on both. Not to mention the sales that could be made if ALL apps were available for “i” devices.

There are many people who argue that it’s all about revenue: If Flash were available on “i” devices, users could watch TV shows on the internet for free instead of buying them through iTunes and users could play some of the hundreds of Flash games on websites instead of buying games through the App Store, on which Apple takes a 30% cut of every sale.

Late last year “i” app developers were thrilled to hear that Apple would now allow them to use Flash in the development of their apps. A large amount of game programming has been done in Flash for years, so it must have been a relief to game developers to know that they didn’t have to immediately learn a new programming language to tap into this market. It’s still not available for web browsing on the Safari app, but if that’s really important for your web experience, there are several Flash capable browsers to choose from in the App Store for “i” devices.

As a web developer, I think I speak for all of us in saying that we’re very excited and happy to learn new things like HTML5 (an “i” friendly coding language) which I’m sure will broaden to someday do just about everything we ever did in Flash. But in the meantime, we would also like the freedom to continue to use Flash for more complex animations that can’t necessarily be accomplished by HTML5, yet. And now that Mr. Jobs has resigned as CEO of Apple, we can only hope that the new chief will see it our way and support flash in their standard software for mobile browsing.