Facebook’s annual F8 developers conference is typically chock full of splashy product and new feature announcements.
This year, the social media giant entered F8 under a cloud of high-profile scandals, including how the company deals with hate speech, election integrity, and data privacy.

Even so, Facebook CEO Mark Zuckerberg and other executives unveiled a variety of new products at the 2-day event, going to great lengths to show that the company still has a few tricks up its sleeves despite all the recent distractions. 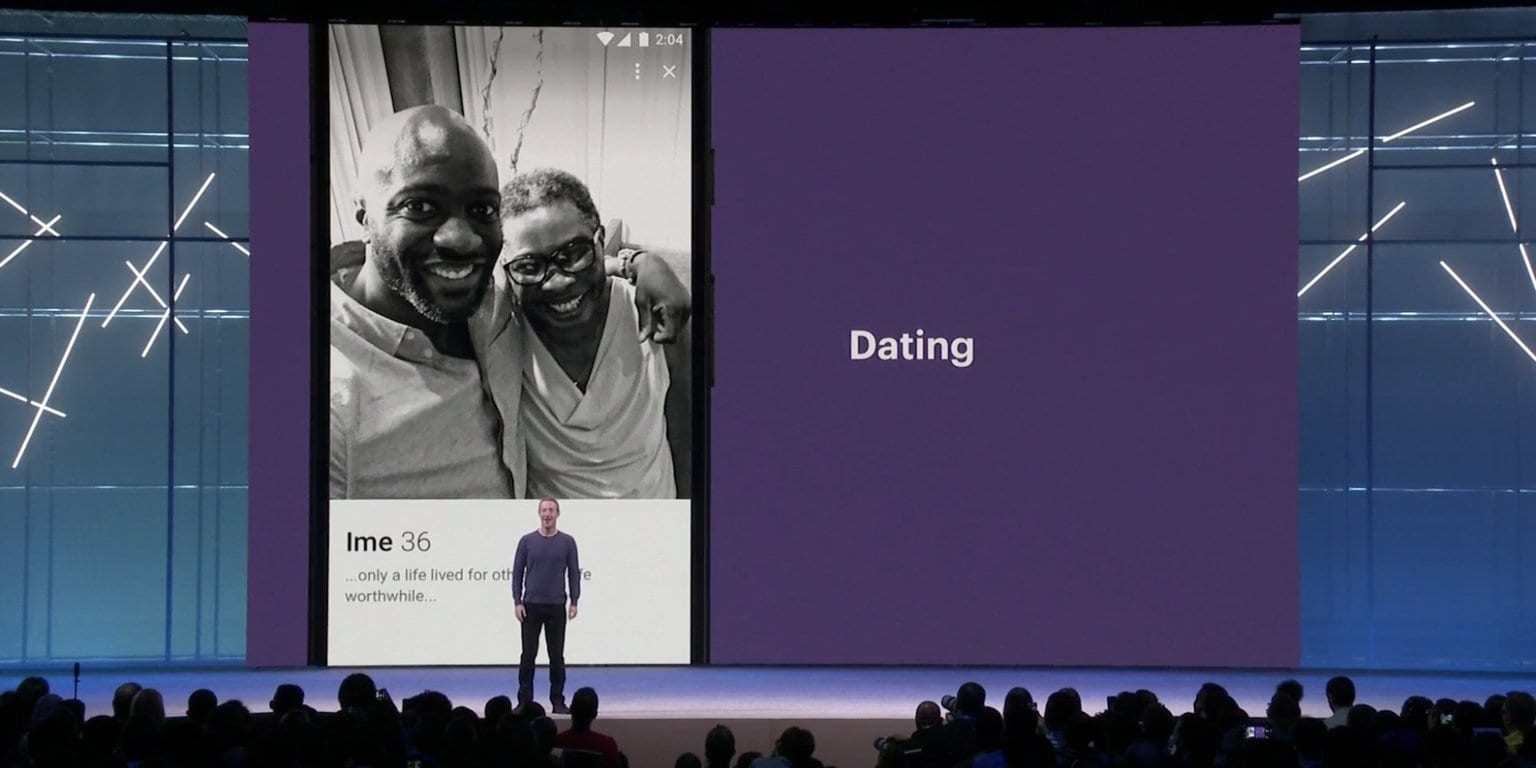 Facebook will be integrating a feature for online dating directly into its main social-networking app. The feature, called Dating Home, will be opt-in and accessible by clicking on a small heart icon in the top right of the Facebook app.

Users who choose to create a Facebook dating profile will be able to chat with potential matches based on events and groups both are interested in.

Lest you get the wrong idea, though, Zuckerberg says:

“This is going to be for building real long-term relationships, not just hookups.”

Showing off the new feature, he even poked fun at himself using his recent Congressional testimony in response to the Cambridge Analytica data privacy scandal.

“Let’s say your friend is testifying in Congress … you can laugh together, cry together. Some of my friends actually did this! Let’s not do that again any time soon,” he said.

Users can already video chat with multiple people on Facebook Messenger, but the company announced that Instagram and WhatsApp, both of which are owned by Facebook, are getting the feature too.

On Instagram, users will be able to minimize the video and continue video chatting while using Instagram simultaneously.

Accompanying the hardware, Facebook also announced Oculus TV, a feature that will put users in a virtual living room where they can watch shows from ESPN, Netflix, Hulu, and Showtime together.

This experimental feature was perhaps one of the most stunning demos Facebook showed off.

The company uses machine learning technology and something it called “point-cloud reconstruction” to transform flat, two-dimensional photos and videos into immersive 3D worlds.

“You pop on a VR headset and you’re there again. Walking around. Looking around corners. Seeing the places where your memories happened” a Facebook exec said during the demo. Facebook did not provide any timeframe for when this might be available.

Users will now be able to upvote and downvote comments on Facebook, impacting the order in which they appear under a post. It’s a feature users have been asking for and it appears the platform is finally adopting the Reddit-like feature.

Facebook Messenger is getting a big redesign, making the app less complicated and cluttered.

The revamp, which is coming “soon,” streamlines the social media giant’s standalone messaging app by ditching a dedicated tab for games and camera and focusing on communication, including new features that translate messages in different languages and bring augmented reality to online shopping. To judge by some of the photos, the new version also appears to have a dark mode.

A new way to shop in Messenger

Facebook is integrating augmented reality into the Messenger app to create new types of shopping experiences.

Messenger boss David Marcus showed a demo of a new Nike sneaker released on the messaging app: Users with a special code can zoom in and check out the new shoe, share it with their friends and click to buy it.

In Facebook’s ongoing and complicated battle against hate speech, the company said that its AI technology is flagging content containing hate speech before it even gets reported. With more than 2 billion users, that kind of automated process can bring a lot of efficiencies.

But Facebook acknowledged that it still needs human moderators to review content flagged hate speech content so that it doesn’t accidentally censor posts that are sarcastic or that are actually criticizing hate speech.

As Zuckerberg noted himself last month when discussing the topic, it’s easier to build an AI system to detect a nipple than it is to detect hate speech.

The company expanded its open source offerings for developers working with machine learning, neural networks, and artificial intelligence, including a new version of its AI framework PyTorch 1.0.

There’s been lots of anticipation for a Facebook smart speaker, the company’s answer to products like the Amazon Echo and Google Home. Facebook’s version will have a built-in screen and was initially due to make its debut at the conference.

But according to news reports, Facebook pulled the plug on showcasing the product at the last minute, perhaps out of concern that the product might raise privacy concerns during what’s already a sensitive time for the company.