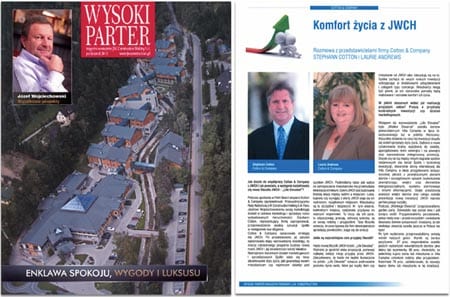 It’s been quite the summer in Warsaw, Poland. We’ve enjoyed getting to know this country of proud people and its rich history that includes a period of Soviet Communist dominance from 1945 to 1989. Considering Cotton & Company opened for business in 1983, in some ways we had a five-year head start on an entire nation who only became capitalist following the Soviet fall.

In contrast, we were humbled to learn that Poland’s Constitution is only second in age to the US Constitution, even though the establishment of a Polish state is identified with the adoption of Christianity in 966, far beyond the American Revolution in 1776.

So what brings Cotton to the eastern bloc — JW Construction, the largest developer of residential, commercial and hospitality projects in Poland. With a rapid expansion plan of new investments and increased competition from international developers, founder Josef Wojciechowski reached out to Cotton & Company in the United States. Our mission is to guide JW Construction through a corporate rebranding through the promotion of lifestyle oriented sales initiatives. We are here to help teach the Polish people a better way to live and a more enjoyable, healthy & happy lifestyle.

Even more important, Cotton is shifting the company’s sales approach utilizing the digital environment and database management, tracking and reporting to gain a better understanding of the factors that influence sales success. This groundbreaking program lays the foundation for JW Construction’s future, permitting critical decisions about new opportunities to be based on data driven as a result of the comprehensive plan.

We have made wonderful new friends, learned the ins and outs of Polish traffic and have gained a new appreciation for the four-season climate. We have made an impact over 5,000 miles from home, and we have just begun to create the Cotton & Company legacy in Europe.